United Airlines to offer new service between Edinburgh and Chicago 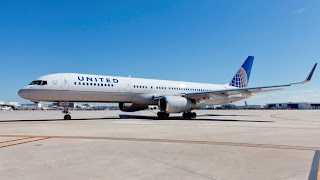 The only non-stop flight linking Edinburgh with Chicago has been announced for next summer. The flights between Edinburgh and Chicago start from 23 May.
The route will be operated by United Airlines.

The Edinburgh-Chicago flight will depart Edinburgh at 10:25, arriving in Chicago at 13:00 the same day.

The return flight will depart Chicago at 18:00, arriving in Edinburgh at 07:45 the following day.
Home town
Bob Schumacher, United Airlines' managing director sales for the UK and Ireland, said: "Having recently celebrated 15 years of operations in Scotland, we're delighted to expand our schedule with seasonal non-stop service to Chicago, United's home town.

"Next year's Homecoming promotion and Ryder Cup at Gleneagles make it the ideal time to launch these flights, which will offer our customers an increased range of travel choices and opportunities."

First Minister Alex Salmond said: "By improving direct routes overseas, we can help reduce the need for travellers to make extra connecting flights via London or the continent, support tourism, trade and investment and so further strengthen Scotland's economy.

"The eyes of the world will be on Scotland in 2014 and, as we host international sporting stars at the Commonwealth Games and Ryder Cup and celebrate another Year of Homecoming, we hope to welcome visitors from across the world, not least from the United States with whom we share strong and enduring bonds."

Gordon Dewar, chief executive of Edinburgh Airport, said the new route was "a fantastic validation of Edinburgh and Scotland as a whole".

He said: "We are delighted to have played our part in developing this route with the other agencies and government departments that make up Team Scotland.

"This collaborative approach works and we look forward to bringing many more international routes to Edinburgh in the coming months."
Posted by Golf Tourism Scotland at 2:29 PM No comments: 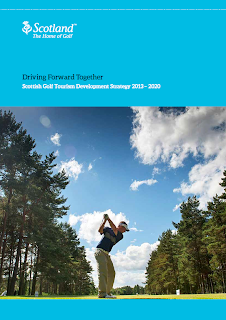 A new tourism campaign is aiming to capitalise on the staging of the Ryder Cup and The Open Championship to make Scotland the world's leading golf destination.

Earlier this year a report estimated that tourism around the sport generates £220m a year and the new Driving Scotland Together strategy aims to increase this to £300m by 2020.

The Ryder Cup is being held at Gleneagles in Perthshire next year and The Open will be played at St Andrews in 2015 and in Troon the following year.

The tourism campaign, which includes VisitScotland, EventScotland and the Scottish Golf Union, aims to promote and develop other courses and regions around the major events to encourage tourists who come for the big tournaments to return again.

Golf is said to have started around 500 years ago on coastal land around the country and Scotland has some of the most famous courses in the world among its nearly 600 clubs, including St Andrews, Muirfield and Turnberry, but it has been rivalled in recent years by the US.

Stewart Walker, chairman of industry body Golf Tourism Scotland, which is also involved in the campaign, said: "There is no doubt that the golf tourism industry in Scotland already has the greatest collection of assets anywhere in the world as well as an enviable history and heritage in the game.

"What this strategy is designed to achieve is ensuring all partners involved in growing the golf tourism industry are working together in order to sell and market Scotland as the home of golf to its full potential.

"Each partner involved in the strategy brings an area of expertise to the table and together we can ensure that Scotland is known as the must-visit golf destination in the world and grow the value of the industry to the economy of Scotland."

Tourism Minister Fergus Ewing said: "Golf in Scotland has never been more in the spotlight thanks to an envied schedule of world-class events taking place at the home of golf.

"These events are played on many of the world's top-ranked golf courses but Scotland also has many hidden gems too, giving golfers of all levels a variety of courses to play.

"These events, including the 2014 Ryder Cup at Gleneagles, bring with them a terrific opportunity to highlight Scotland to hundreds of millions of potential visitors worldwide and to grow what is already a hugely important sector in terms of income generation for Scotland.

"The collaborative approach between various organisations in pulling this strategy together is exactly what Scotland's golf tourism sector requires and demonstrates that we are all working towards one single aim: to make Scotland the must-visit destination for every golfer."

The campaign is part of a plan to create a legacy for the tourism industry out of next year's Ryder Cup.

Download your copy of the strategy using the link below:-
www.golftourismscotland.com/strategy2020
Posted by Golf Tourism Scotland at 9:41 AM No comments:

Here is a summary of the activities included in Team Scotland Partner Package for 2014:-


Scotland Golf Day, 10th Anniversary - Tuesday, 21st January
Each registered partner company is guaranteed a space at this very popular event and will be given the opportunity to invite two additional guests of your own choice or with the help of GTS. Golf will be followed by a networking BBQ lunch at the prestigious AAA Four-Diamond Grand Cypress Golf Resort in Orlando.

PGA Merchandise Show - Wednesday, Thursday & Friday, 22nd – 24th January
Team Scotland come together on stand at the Orange County Convention Centre. Partners will have their own dedicated and branded area on stand from which to network and promote their business or product. Our dedicated 1,200 square feet stand, located within the Travel Pavilion, is 70% larger than in 2013!


Scotland Shindig - Date and venue TBC
Following on from the success of previous get-togethers, including our very successful Burns Supper in 2013, we will once again host our popular Scotland Shindig. This is the perfect opportunity for stand partners to network in an informal social environment.

Download Sign-up Form
Download GTS T&Cs
Funding is available... Join Team Scotland and claim your UKTI grant of £2,000!!
Once again UKTI is offering support to UK based Team Scotland partners in the form of a grant worth £2,000! If you are interested in obtaining a grant and for further information, please contact Ciara Morgan of Sports and Play by email. Places are limited so be quick. Please note: You must register and be confirmed as a partner with GTS prior to making your application. Confirmed stand partners agree to GTS Terms and conditions.


The costs to attend the PGA Merchandise Show 2014 and be part of the team Scotland presence in Orlando are listed below. Non-members will be subject to an administration charge which is stated below. This is included as part of the annual fee for GTS Members. If you would like more information or to join GTS, please contact Scott Abercrombie, scott.abercrombie@golftourismscotland.com or call +44 (0)1786 459224, 9am - 5pm UK time. Mon – Fri.

To book your space before it’s too late, complete the attached event sign up form. You will be required to pay a 50% deposit on submission as shown above, only once your payment has been processed will your space be confirmed. Please see the sign up form and GTS Event T&C’s for more information.


We anticipate a huge demand for space and urge you to book up now. More information will be released in due course, if you would like to discuss this opportunity please do not hesitate to get in touch.
Posted by Golf Tourism Scotland at 2:24 PM No comments:

With just one week to go the Team Scotland golf partners, Golf Tourism Scotland, VisitScotland, Scottish Enterprise, HIE the SGU / SLGA and with the support of the PGA in Scotland, would once again like to invite you to join us for the launch of the Scottish Golf Tourism Development Strategy 2013 - 2020, "Driving Forward Together" at Murrayshall House Hotel and Golf Courses next Thursday 12th September 2013.


"Driving Forward Together" is the first national golf tourism strategy and has been developed by both the golf tourism industry and the public sector working in partnership for the benefit of golf tourism businesses in Scotland.


Golf Tourism is a tourism sector that is acknowledged to deliver growth and jobs, the combined value of Golf Tourism to Scotland is £220 million and it is estimated that this could grow to over £300 million by 2020. It is an industry in which Scotland competes well internationally. KPMG Golf Travel Insights 2013 ranked Scotland third in the world in terms of future golfing tourism hotspots.


But to continue to be a contender in this fiercely competitive global marketplace we need to ensure that we are all aligned behind a common ambition. A key strand to the strategy is unifying the golf tourism sector in a Team Scotland approach and modernising the approach taken by many businesses to marketing, promotion and customer service.


We do hope you can join us at the launch event to continue the discussion about what we can do together to ensure that ambition for growth and Scotland "to be the world's leading golfing destination by 2020" is achieved.
Thursday 12 September

To confirm your attendance at the Strategy Launch,
telephone 0845 607 8787 as soon as possible or book online:-
CLICK HERE TO BOOK ONLINE

GTS Annual General Meeting
GTS members are invited to confirm their attendance at the AGM by email to scott.abercrombie@golftourismscotland.com.


Non-members are invited to attend the GTS AGM as observers.
Posted by Golf Tourism Scotland at 9:43 AM No comments: