Scotland pro-shops getting it right

The following artical is taken from the July edition of Golf Retailing. For more information or to subscribe to the magazine, visit: www.golfretailing.com

Stats compiled by 59Club, the golf-specific mystery shopper service and a PGA Official Supplier show variations in staff attitude for golf clubs across the UK.

Back in 2012, an article in The Economist created quite a stir when it declared: "Economically, socially and politically, the north is becoming another country ..."

If that is true — and far be it for us to confirm or deny — then it's to that other country you should head if you're in search of truly excellent service in your golf pro shop. For figures established by 59Club show that the further north you travel for golf, the better the service, within the pro shop, you're likely to experience. The figures are the first releases from mystery shopper visits in the first quarter of 2014 and show clearly that Scotland, is leading the way in the UK in terms of golf shopper experience. The most glaring example of this comes in terms of the sales experience, but we'll be looking at that in a future edition. This month we're looking at staff attitude within the pro shop, which is broken down into five categories:

Scottish clubs scored very highly in this area, with a rating of 98 percent, suggesting that staff are hugely welcoming, and putting the lie to the oft-quoted PG Wodehouse line that "it is never difficult to distinguish between a Scotsman with a grievance and a ray of sunshine".

Clearly, those in Scottish pro shops are, indeed, a metaphorical ray of sunshine when dealing with visitors.

Scotland also leads the way in overall pro-shop experience — see graph which, additionally, includes the ratings for 'process' and 'sales'. Indeed, Scotland extends its advantage over the North-West to 6.7 percentage points, despite dropping to an overall score of 91 per cent.

A spread of just 1.7 percentage points covers the four 'mid-table' performers here, with the Midlands, just heading the South-East [of England], South-West [of England], and, lastly with just 65.9 percent, London and the Home Counties.

The three best-performing venues in the UK — known in the 59Club system as the 'Podium' score — amassed an impressive 95.6 per cent performance rating overall, considerably higher than the average of the UK as a whole which falls to 69.6 per cent. 59Club director Simon Wordsworth believes the slight difference in ratings between the North, Scotland and 'the rest' might even be down to cultural differences, reinforcing the north-south divide stereotype.

"Is it coincidence that the best overall service is found in Scotland, the Home of Golf? Where they really know what a golfer requires and expects ... And then, the next best regions are the North-West and North-East [of England], the traditional heartland of independent retailing. Or maybe I just have a romantic view of traditional values," he smiled.

"These early stats for 2014 do come as something of a surprise to me, as many of the 59Club Gold Flag venues and recent award winners are in the south — Wentworth, for example was the Ultimate Golf Members' Club, in 2014; Stoke Park, was also a gold flag winner in the members' club category, while Celtic Manor Resort took gold in the golf resort section. That reaffirms that the quality of service is present countrywide.

"What these early 2014 figures may suggest, however, is that the Scots, in particular have upped their game. There are, still, of course, some honesty boxes on the first tee at some of the more remote Scottish courses and maybe it's that sort of old-style value and bonhomie which they've managed to translate successfully to a twenty-first century retail environment.

"Plus, of course, there's all the historical ambience which, as a nation, they use very well to their advantage. We should not rest on our laurels, however — or in the case of our Caledonian friends, on our thistles — for there is still room for improvement across all areas. An overall UK rating of 69.6 per cent is not cause for major concern, but it does mean there's 'wiggle room' of 30.4 per cent. And who among us wouldn't appreciate seeing our staff's performance increase by that sort of figure?"
Having quoted a devotee of the Home Counties in PG Wodehouse, it seems only right, given the statistics we've been studying, to sum up the 59Club role in the process in the words of one of Scotland's favourite sons, the poet Burns: "Oh would some power the giftie gie us; to see ourselves as others see us:"

59Club gathers its statistics by sending golfers to experience a golf club's service 'as delivered'. It gives its testers strict guidelines, but has virtually no subjective questions within its criteria, thus ensuring a totally impartial and fair reflection of the experience. The criteria have been developed with client clubs to deliver the relevant information they need to manage, run and improve their businesses. There are three levels of rating in the 59Club system: Golf industry: This score is based on clubs tested by 59Club but which are not clients Iof 59Club; 59Club venue: This score is calculated from clubs which are part of the 59Club benchmarking system and therefore, trying to improve their customer experience; and Podium: This score is based on how the three best-performing venues overall deal with a particular question or scenario.
Posted by Golf Tourism Scotland at 10:42 AM No comments:

Jamie is based with the Tourism Team in Burns House, Ayr. Jamie is employed by the Ayrshire & Arran Golf Partnership, who have been set up to include golf & industry partners to develop and market the golf offering across region. 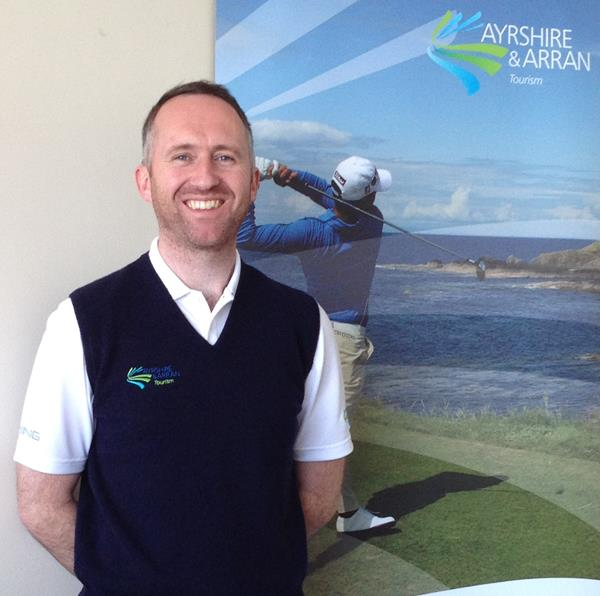 Are you a community group interested in developing a tourism project?


The Ayrshire and Arran Tourism Team is running  a programme of learning journeys in the Autumn to support community groups who are looking to develop tourism projects. Whether you are a group wanting to develop a new event, a heritage trail Continue Reading

Posted by Golf Tourism Scotland at 12:09 PM No comments:

Notice the word "country" here - not just Carnoustie but the other golf courses in and around Carnoustie. Northeast off the Firth of Tay (Fife/St. Andrews is on the other side of the water), Carnoustie Country (Angus) tends to be the Rodney Dangerfield of Scottish Golf.
"It just don't get no respect."

Everyone knows the great championship course at Carnoustie and nearly everyone wants to play it. In my fourteen years of trip planning, Carnoustie Championship has always ranked first or second in rounds played (along with St. Andrews' Old Course). The problem is, virtually all trip organizers and independent travelers treat Carnoustie as a "day trip" - either from St. Andrews or en route to St. Andrews. What these day trippers are missing is a chance to play, not only Carnoustie's two other links courses, but three of the most challenging, historic Open Qualifier courses in Scotland. These latter are: Panmure at Barry (adjacent to Carnoustie); Monifieth Medal (adjacent to Panmure); and Montrose Medal (about thirty miles north of Carnoustie). Together, with Carnoustie Championship, I wager these four courses comprise the strongest set of championship-level venues in Scotland. A case can be made for a comparable four in Ayrshire, E Lothian, or Fife, but when it comes to value for money, Carnoustie Country wins hands down.

Total cost on these four courses this year is £337 midweek and £358 at the weekend. Those prices would not even get you to the first tees on Kingsbarns and St. Andrews Old Course in Fife. Or make life easier; purchase a Carnoustie Country Dream Ticket. This single ticket allows play on all four courses for just £325. More information is available on the Carnoustie Country website.
The bonus points in this picture are the entertainingly delightful, and less penal companion courses to the Carnoustie Championship. These are the Burnside and the Buddon layouts that fit inside and around the "big course". Nothing to be sneezed at, these are challenging links layouts with plenty of design value. The Burnside has always been highly regarded (perennially among the UK's Top 100). Most recently, the Buddon has received a £500,000 upgrade to develop two new par-4 holes and merge the old 9th and 10th into a superb par-5.

Of the three Carnoustie courses, the Buddon lies closest to the water and is the most scenic of the trio. And here's the best part: Carnoustie Links sells a combo ticket for these three great courses for £180. With the Championship pegged at £154 this year, that's an effective £26 for the Burnside and Buddon!! (worth two exclamation marks).

To find out more about Carnoustie Country, visit the website: www.carnoustiecountry.com

Posted by Golf Tourism Scotland at 2:02 PM No comments: 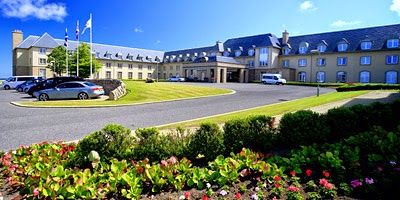 
Posted by Golf Tourism Scotland at 9:35 AM No comments: