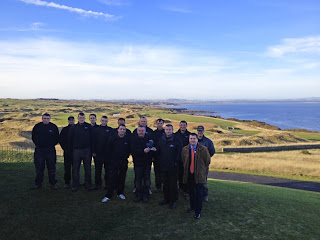 
The Golf Tourism Scotland awards recognise the very best exponents of golf in Scotland and are voted for by those who are most knowledgeable on the subject – the people working within the country’s golf tourism industry.


The five-star Fairmont St Andrews resort boasts two championship golf courses, The Torrance and The Kittocks, and has played host to a number of prestigious events, including both the Open Championship’s final local qualifying and the SSE Scottish Senior Open since 2009.


Originally opened in 2001 and designed by Bruce Devlin, the coastal Kittocks course offers 18 challenging holes with spectacular panoramic views of the Eden Estuary and North Sea. Enhanced following remediation work in 2009, The Kittocks Course, with its undulating terrain, can be played from four sets of tees, with golf buggies available, making it ideal for players of all abilities


Fairmont St Andrews’ general manager, Robert Glashan, who accepted the award on behalf of the resort, said: “We’re very proud of all the accolades Fairmont St Andrews has amassed over the last couple of years as a resort, but for The Kittocks Course to receive added recognition from the Golf Tourism industry here in Scotland is something really special.  This is testament to all the hard work that our Golf Course Superintendent Neil Ballingall and his team put in throughout the year”

During its 12-year history Fairmont St Andrews has accumulated a host of accolades for hospitality, golf, spa and cuisine, as well as welcoming some of the world’s most powerful individuals as the venue for a G20 summit and Northern Ireland peace talks, while Prince William was a regular visitor and member of the spa and gym while studying at university.


For more information or to book a stay, call 01334 837000, email standrews.scotland@fairmont.com or visit www.standrewsbay.com
Posted by Golf Tourism Scotland at 1:23 PM No comments:

NEARLY 5,000 golf fans have already booked their spots on special rail services heading to Gleneagles for the Ryder Cup.

Sales of tickets for the dedicated train services opened around a fortnight ago to high demand, Transport Scotland said.
The services will make an extra 7,500 spaces available for those heading to the Ryder Cup each day of the tournament.
Worthy welcome
Transport Minister Keith Brown unveiled the sales figures as he visited Gleneagles station to meet some of the spectators buying train tickets for travel to the 2014 event.
The tournament in September will see the world’s top golfers do battle in the clash between European and America in Perthshire.
Mr Brown said: “Scotland will be propelled to a truly international audience during 2014, with spectators in tens of thousands and audiences in their millions watching the Ryder Cup and Commonwealth Games, among other events.
“It is only right we offer a worthy welcome to our visitors including an attractive transport network with sufficient capacity. With the ongoing station upgrades announced earlier this year and these extra spaces, spectators can relax in the knowledge we will get them to the event in comfort and on time.
“This latest commitment is part of a wider package of measures we are implementing to improve public transport for events in the Year of Homecoming 2014. Our overall aim is to encourage as many people as possible to minimise their car journeys while providing a lasting legacy that increases future public transport use.”
Road funding
Mr Brown has also announced a Scottish Government contribution of £1 million towards the new £3.8 million link road aimed at improving safety and access between Gleneagles station and the A9 road.
Project managers Perth and Kinross Council are contributing £1.5 million to the scheme, while a further £1.2 million is coming from the Tayside and Central Scotland transport body, Tactran.
Council leader Ian Miller said: “Perth and Kinross Council has been working for many years to secure the improvement of road access to Gleneagles station, making it safer and opening opportunities for a local transport hub. We’re delighted that the project has come to fruition in time for the Ryder Cup. The new link road is a key project in our legacy programme, ensuring long-term benefits for our residents.”
Work on the road has started and is expected to be completed by June next year.
Gleneagles station is also having a facelift, which will see an overhaul of the station buildings and the installation of new lifts, waiting rooms and toilet facilities.
Posted by Golf Tourism Scotland at 12:46 PM No comments: