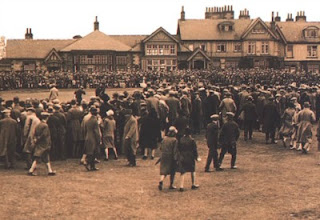 The first mention of golf at Murfield and the Honourable Company can be traced back to 1744. On March 7, the Edinburgh Town Council presented an impressive silver club for an annual competition for 'The Gentleman Golfers'. The council required that there should be proper regulations for governing play and the brand new Company of Edinburgh Golfers produced thirteen Rules of Play for the first competition. A surgeon called John Rattray won this very first competition.

In 1795, the Club applied for an official charter, which was granted in 1800. From the beginning, the Company was an official authority on the Rules of Play, but passed on the honour to the Royal & Ancient Golf Club of St Andrews in the late nineteenth century.

By 1830, golf had become unexpectedly popular and overcrowding forced the club to begin playing on a local horse race course. Without a clubhouse, members had to store their equipment under the race-course grandstand. This was not an ideal situation and in 1868, the Club built a clubhouse and began to charge members an annual subscription. However, the course was now shared by four clubs, and the Company was forced to move. In 1891 they purchased The Howes, another old horse-racing track. The new course, christened Muirfield, was designed by Tom Morris. Within a year, it hosted the Open Championship.

The course originally had sixteen holes, but was extended to eighteen holes for the Open in 1892. It was entirely surrounded by stone walls, with areas of sandy wasteland and some waterlogged turf. Over a period of thirty years, the land was drained and improved and the sandy areas cultivated. This dedicated interest in improvement led Muirfield to hold another Open Championship in 1896 and to purchase additional land in 1907 to extend the course.

In 1919, Muirfield and the Company chaired a meeting at which the R&A were asked to take over the administration of the Open and Amateur Championships from the individual Scottish host clubs which had previously run them. This allowed Muirfield to focus more on improving play on the course.

In 1923, a further fifty acres were purchased to the north of the course. Renowned course designer Harry Colt was consulted and implemented a redesign that produced the layout of the course as it is today. He introduced fourteen new holes and his design included two loops of nine holes, where one played within the other in the opposite direction. With this, Tom Simpson's re-modelling of the thirteenth hole in 1935 and the current work of golf architect Martin Hawtree, there have been few changes to the physical layout of the course.

Since 1892, Muirfield has had the privilege of hosting forty-two national and international competitions, which is roughly one every three years. Seven of thirteen Open Champions have won their first major over the course but only two have ever won twice – James Braid and Sir Nick Faldo. Of those golfers who have won four or more Open Championships, only Harry Vardon and Tom Watson have triumphed at Muirfield. Watson also won his third Senior Open at the course in 2007.
Golfing competitions for women have graced Muirfield for team matches on several occasions; for the 1914 Scottish Close Championship, the 1952 and 1984 Curtis Cup, and the 1963 and 1975 Vagliano Trophy.

The club has also had the honour of twice hosting the annual Oxford versus Cambridge match – the only occasions where this fixture has been held outside England.

Muirfield, with its dedication to quality and the finest art of play, is the favourite course for many renowned international golfers and has inspired countless others. The final of the 1920 Amateur Championship so impressed the attending USGA President, George Herbert Walker, that he was inspired to found the Walker Cup contest between the top amateurs in America, Great Britain, and Ireland. The 1959 Walker Cup match introduced Jack Nicklaus to Muirfield. He felt such admiration for this historical club and Company that he named his own course in Ohio, Muirfield Village. High praise indeed!
Posted by Golf Tourism Scotland at 2:51 PM