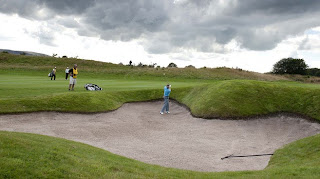 Golf fans in 75 countries around the world will find out on Monday if they have bagged a ticket for next year's Ryder Cup, after record demand.

Applications for tickets were up 38% compared with the 2010 event at Celtic Manor in Wales, according to organisers.

Around one in three (37%) spectators heading to the Gleneagles event will be based in Scotland.
Europe's Ryder Cup director, Richard Hills, said: "The Ryder Cup is one of the world's most prestigious sporting events and attracts a global audience.

"In Europe the host nation stands to gain substantially from holding a Ryder Cup, as we will see in Scotland, when people from 75 different countries will travel to Gleneagles especially for the event."

Sport Minister Shona Robison said: "The record demand for tickets and the appetite to travel to Scotland for The 2014 Ryder Cup illustrates exactly why we have worked so hard to bring the event to the Home of Golf.

"The Ryder Cup is a truly international event which will showcase Scotland in all its glory, as well as bringing many lasting benefits to our country but it is also heartening to see such strong interest from the people of Scotland."
Posted by Golf Tourism Scotland at 9:14 AM