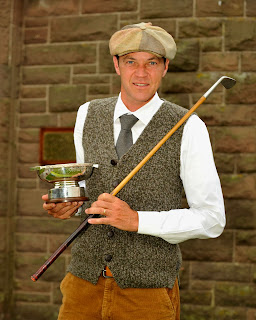 
“What a highly enjoyable event,” said Paolo, who only took up hickory golf two years ago.  “It was like going back in history, providing a reminder of what golf used to be – and what golf should be. Let’s do it all again next year!”


Tournament organiser Lionel Freedman explained that the World Hickory Open is a two-day tournament playing with hickory-shafted golf clubs and, in keeping with the ethos of the tournament, the competitors all dress impeccably in golfing outfits inspired by the golfers of the 1920s and 1930s. “This year’s World Hickory Open was played on Montrose Medal, a Carnoustie Country golf course with a golfing heritage stretching back over 450 years, which certainly added to the historic atmosphere of the event,” said Lionel, who co-founded the World Hickory Open nine years ago.


“This tournament is much more than a recreation of golf’s glory days – it’s an opportunity for some of the world’s best hickory golfers to test their skills against each other on top notch links courses. Every year, the standard of golf played in the World Hickory Open soars higher and this was certainly highlighted by this year’s tournament, which was played on a challenging course and in sometimes difficult weather conditions.”


Golf professional Andrew Marshall from was runner-up in the World Hickory Open, with Geoff Bleasby from in third place. The winner of the ladies competition was 18-year-old Swedish golfer Frida Rydberg, a first time competitor who had travelled to Carnoustie Country from with her parents, who were also competing in the tournament. “It was great fun to play here,” said Frida. “The courses are so very different from those in .”


Despite the second round of the tournament being accompanied by heavy rain and strong winds, Mike Stevens, several times National Hickory Champion of America, had a wonderful time at the World Hickory Open. “My second day on Montrose Medal was tough – but it was still very enjoyable,” said Mike, who is a golf professional in .  “Playing on Montrose Medal, with its long, illustrious history, really added to the favour of the event and made it very special.”


Paul Adams was a member of the three-strong South African team. “Montrose Medal is a superb golf course,” he said. “Playing a shot with hickory clubs is difficult enough but at Montrose, I also had to learn how to play the course, which was a huge but incredibly rewarding challenge. In addition, I loved the practice round at Ashludie, which is another Carnoustie Country Gem.”


As the World Hickory Open 2013 came to a close, Lionel Freedman confirmed that the World Hickory Open will be returning to Carnoustie Country in 2014, when it will be held at Panmure Golf Course on 7-8 October, 2014. “At this year’s tournament, the courses were in excellent condition, the facilities were first rate and our 100 hickory golfers from across the globe were given a wonderful, warm welcome. We couldn’t possibly go anywhere else next year!”